I've been thinking about how to mount an amateur radio antenna on my car for a while now. Everyone says the best way is to use an NMO mount in the center of the roof. But since I have a small car with a sunroof, there is only a small area of the roof near the back where it would be feasible. A backup option is usually a semi-fixed mount on the trunk, but my car is a hatchback so a magnetic mount will not work and there aren't any edges straight enough for a lip mount.

Looking at all the various ways people have mounted their antennae, I ran across one person who had used a license plate frame mount under the bolts on their hood hinge. Looking at this location on my car led me to think this would be a really good location to mount mine. I got my father to help since he has the tools needed and we came up with this mount.

We started with a bracket that was scrapped from something because it was a convenient size to begin with. It's approximately 18 ga. steel sheet metal. We drilled out one of the holes to mount under the hinge bolt, cut the slot end off at an angle to butt up against the hinge, and drilled a hole in the end for the antenna mount. The bracket itself was bent to sit against the hood until it comes out, then to hold the antenna straight up.

Since the steel was a little too springy for this application, the antenna wanted to bounce. I fixed this by using silicone to attach a rubber stopper to the plastic trim to act as a shock absorber.

Overall, it came out really well and looks like it's meant to be there. Hope this helps someone who wants to mount an antenna on their VW GTI / Golf / Rabbit! 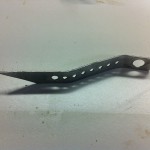 Bracket after shaping before installation. 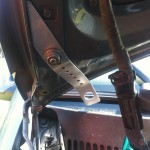 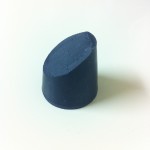 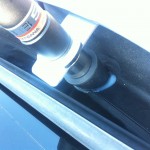 Rubber stopper, as mounted under the antenna as shock absorber. 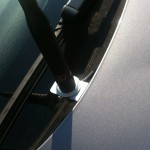 Completed mount, on car, from top. 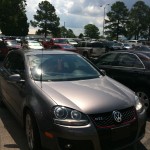 Car with antenna mounted, from a distance.