I really like the open-source satellite tracking program gpredict. I'm primarily a Mac user, so to get it I had to use macports to build it. I don't really care for alternate build systems like that, so to use it on my other systems, I decided to bundle it all up, and to spare some people the trouble, I'm going to post it here.

This build is based on the git revision 73fc281c96873e79fc3d996ea4dd428795cac70d, plus whatever versions of macports libraries it took to build it. It does have a few little customizations based on what I was using it for, including an Az/El velocity plot, a single-satellite transponder view, and a custom layout to take advantage of them. (Screenshots are below.) It's also wrapped using the Platypus launcher to make it a little more native-acting.

Edit: I have updated this to use non-X libraries when possible, and made a few more changes so it acts like a native app in the menu bar and dock. Also, Platypus is no longer used as a launcher. My patches are also available for both my customizations and the "macifying" process.

I'm not really sure what it'll run against, but I built it on Mountain Lion. Let me know if there are any issues and I'll try to look into them, but I don't know how often I'll be able to update it. Of course, use at your own risk. Enjoy! 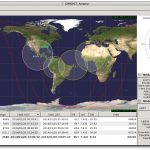 This is the way I normally use gpredict. It also shows the single-sat transponder view in the bottom right. 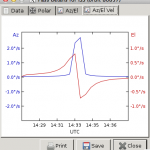 I added this plot for use when manually controlling rotators to figure out if a pass is going to have a large velocity or reversal that would be hard to keep up with.