I pulled out the service manual and located the serial port circuitry. Below is an excerpt of just that section. You can see the infrared LED, H1201, is directly driven, through a 261Ω resistor, from the TXD pin on the main controller. Thus, I should be able to pull the signal from the "far side" of R1201. The location of that resistor is pointed out in the image. 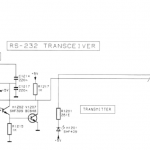 Schematic showing connection of transmitting and receiving components for the optically-isolated serial port. 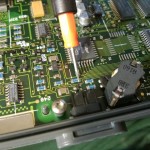 Placing a probe on the resistor, I was able to verify with my multimeter that it was a 5V signal and that it did swing around when I hit the print button on the scope. Since I was still waiting on my USB-to-TTL Serial converter to arrive though, I had to find a different way to capture the signal.

I rigged up an extremely simple program that sets up a software serial port on one pin, reads from it, then outputs the data over the USB serial port back to the PC.

With that running on the board, I attached a probe from pin 4 to that resistor on the scope board.
I configured the scope for ThinkJet format and 9600 bps under the "Special Funct" menu, then hit "Start Print". I used CoolTerm to capture the stream to a file, which left me with a raw stream of data meant to be interpreted by a printer as old as me…

Luckily, lots of other test equipment outputs in this format and someone has had the misfortune of already needing a translator — the Netpbm project has a program called thinkjettopbm that will convert that raw stream into a PBM image which can then be converted to PNG with pnmtopng.